The Visconti Chapel (the fourth on the right) is dedicated to Saint Thomas, and it was commissioned in 1297 by Matteo Visconti, imperial vicar and Captain of the People. The vault, stretching across the right nave, is decorated with a fresco of the Four Evangelists sitting inside imaginative aediculae, probably an Emilian artist’s work dating back to the second decade of the 14th century, as the strong emotional charge and definition of the rich drapery suggest.
On the other hand, the frescoes on the top walls date back to the second half of the 14th century.
On the right, Saint George and the Princess, from the eighth decade of the 14th century, is attributed to an unknown painter named ‘the Master of Lentate’, after the town where he frescoed an oratory.
On the left, the Triumph of Saint Thomas depicts the benedictory saint in the middle holding a book open in his hands – as a symbol of doctrine – while the benedictory Christ above, together with the evangelists and saints, all of whom are bearing a book in their hands, represent knowledge as the product of divine inspiration. On the medium level, next to Saint Thomas, other Doctors of the Church symbolise religious and theological wisdom. In the lower portion, some characters represent learning – these include disciples of Saint Thomas, as well as heretics, such as the sitting character seen from behind, wearing Eastern-style clothes and a wide-brimmed hat on his head.
The right wall houses the sepulchral monument of Stefano and Valentina Visconti (1359), ascribable to the Masters from the city of Campione. The front of the sarcophagus portrays the Virgin Mary and the Child, in the middle; Stefano Visconti presented by Saint Stephen to benedictory Christ, and two saints, on the left; and the Virgin Mary stretches out her hand as a sign of protection towards Valentina Visconti, presented by Saint John the Baptist and followed by two other saints, on the right. The characters seem to be free to move across the space, an effect that is also enhanced by the lack of separation between the three episodes. 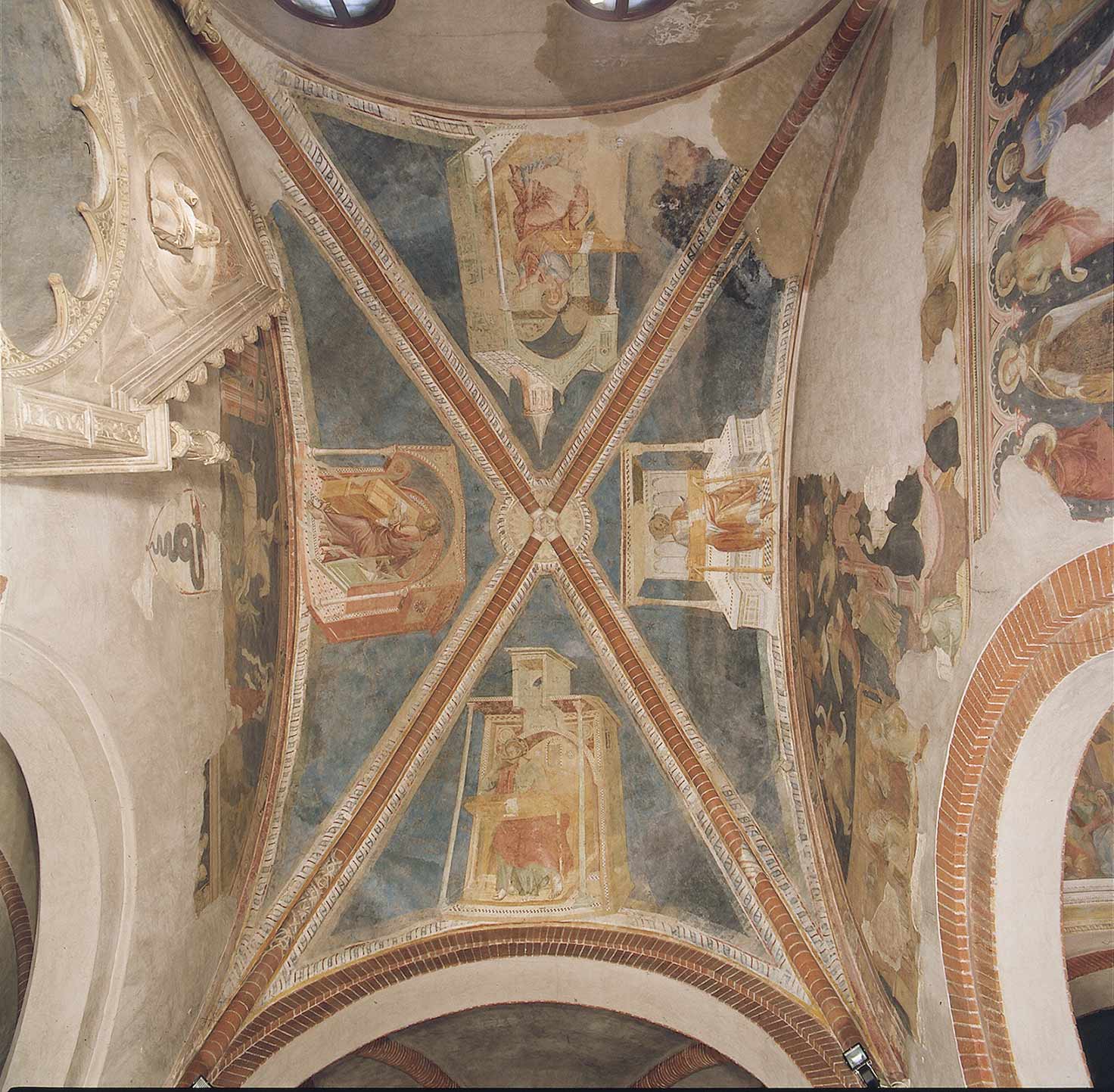 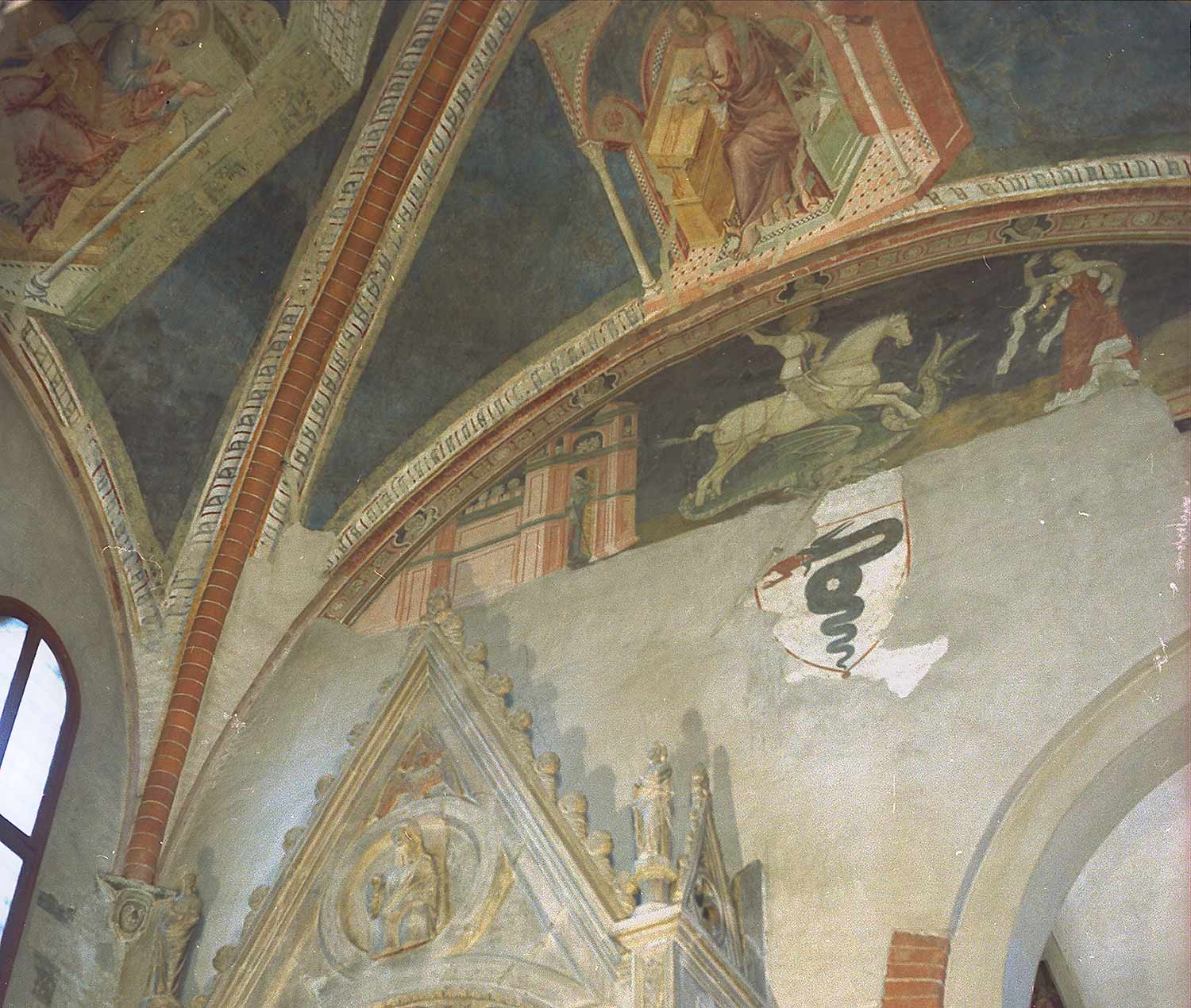 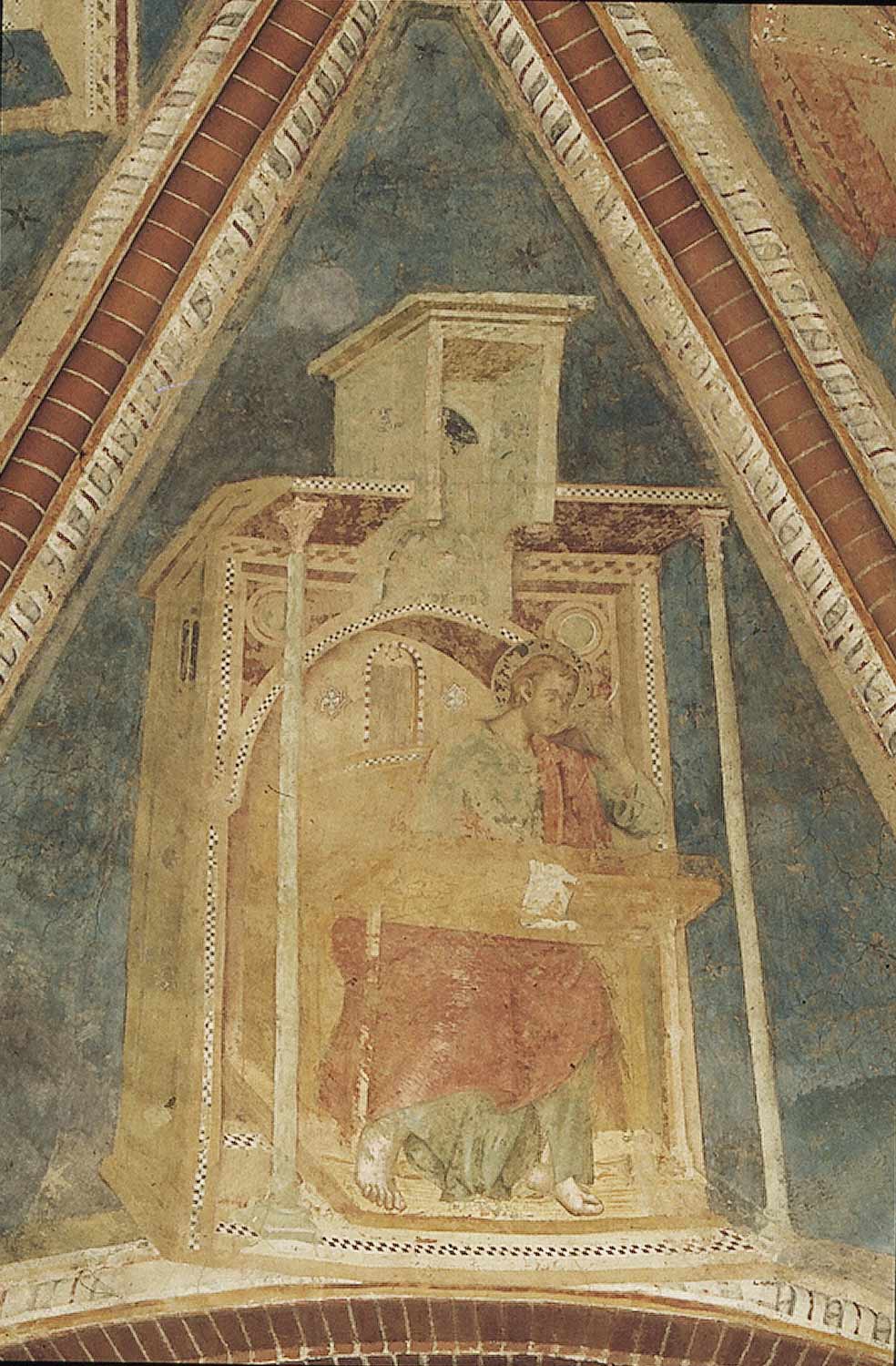 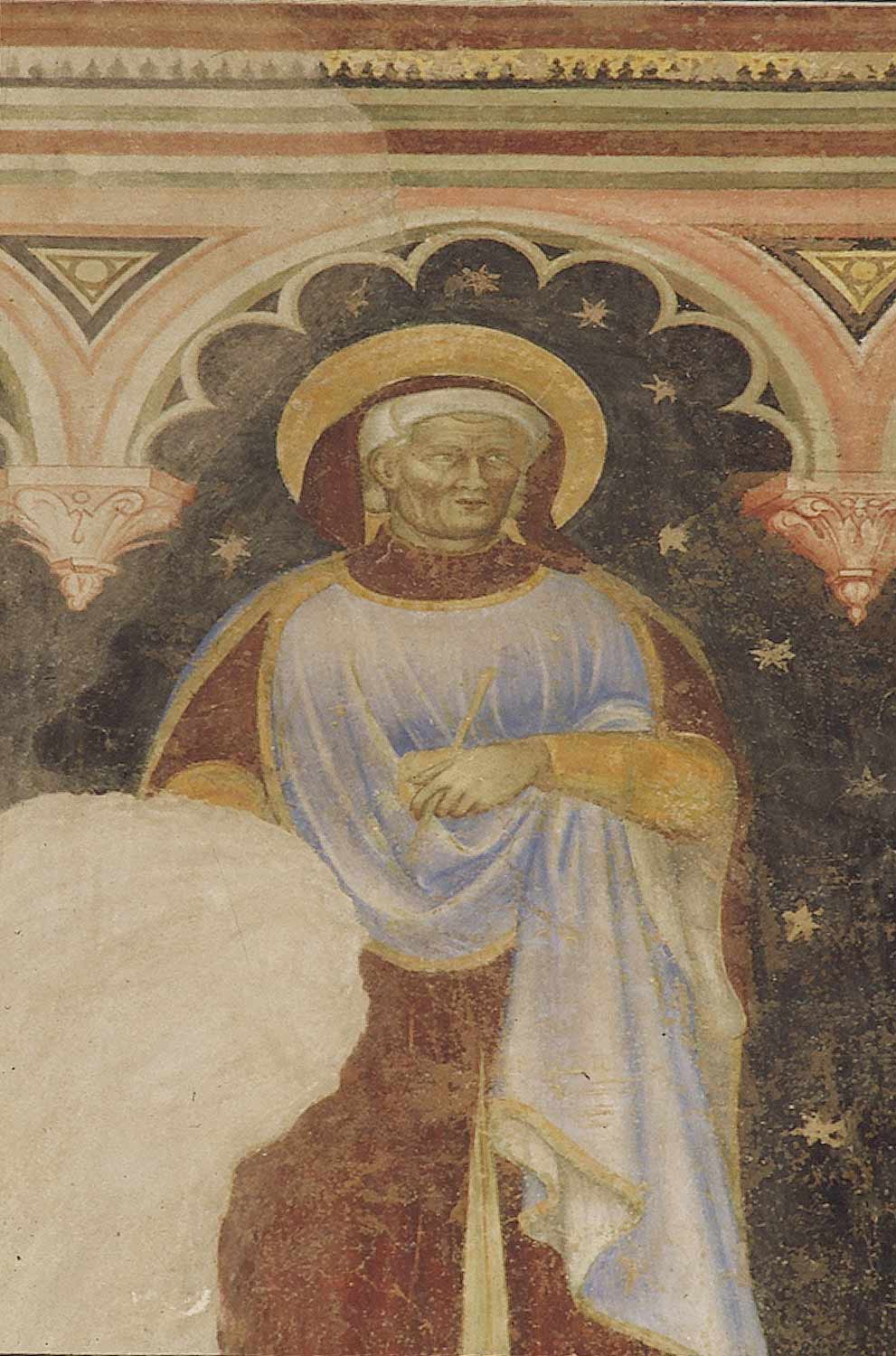 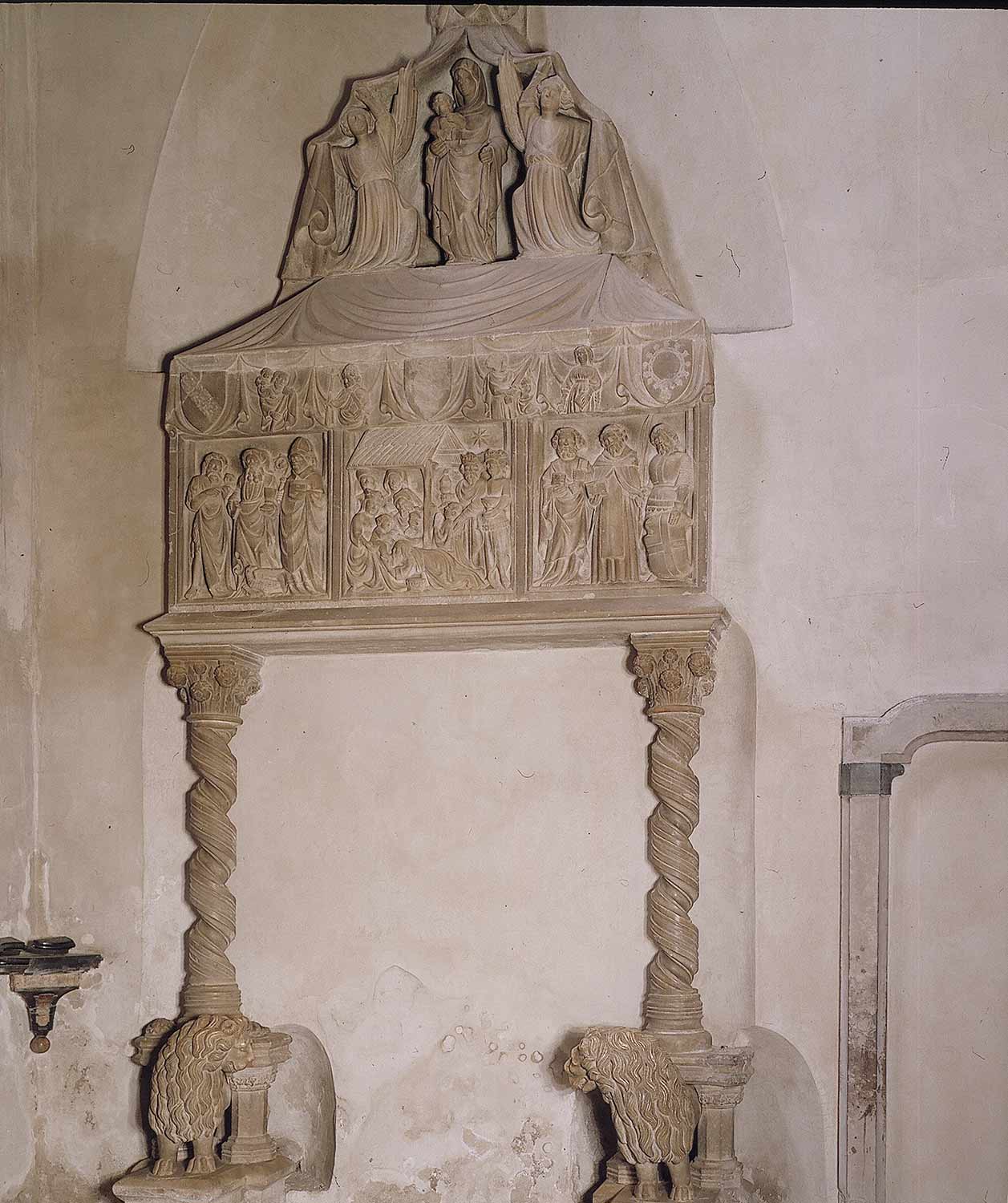